Are Carbs Really The Enemy?

Have you been told to avoid carbs if you want to lose fat? Carbohydrates and their role in a healthy diet seems to be a forever on-going nutritional debate. A simple Google search will return endless results on all the reasons why you shouldn’t be eating carbs. “Carbs make you fat” has been instilled into the minds of weight-conscious people, causing fear around including them in our diets. So it’s time to set the record straight!

Carbohydrates (carbs) are one of the four macronutrients that provide calories, or energy, to fuel the body. They are comprised of sugar molecules that are bonded together and are broken down into glucose (sugar) before being absorbed into the bloodstream. One gram of carbs provides 4 calories. There are three main types of carbohydrate in food:

WHAT DO CARBS DO?

Carbs are the body’s primary fuel source. They allow your heart, lungs, kidneys, brain and muscles to function properly. Carbs are particularly important to fuel the brain, helping us to think clearly and to balance our mood, as well as to enable our muscles to work effectively during exercise. They also prevent protein from being used as an energy source and enable fat metabolism. Don’t sound so terrible now, do they?!

SO WHY ARE WE TOLD TO AVOID THEM?

There is a lot of misinformation out there about carbs and low-carb diets. A common argument to restrict carbohydrates is that carbohydrates are more easily stored as fat than the other two macronutrients – protein and fat. This is based around the function of insulin. Insulin is a hormone which is secreted by the pancreas and its main function is to regulate blood sugar levels by moving glucose to various parts of the body and aiding its absorption. Excess glucose is stored in the liver or in fat around the body, which is why it is commonly referred to as “the storage hormone”. It is thought that the insulin release from the consumption of carbs causes weight gain because if the energy isn’t used, it is stored as fat.

WHAT THE SCIENCE SAYS

Here’s what we can say with confidence – there is zero scientific evidence to suggest you’ll gain weight from eating carbs if your energy intake is less than your energy expenditure.

While you can most certainly survive without sugar, it would be quite detrimental to eliminate carbs entirely from your diet. Sources of carbs such as starchy foods, vegetables, fruits, legumes and dairy products are an important source of nutrients such as calcium, iron and B vitamins. Cutting out these foods from your diet could put you at increased risk of a deficiency in these nutrients plus many others, which can lead to a variety of health issues. Eating enough fibre will also be difficult, which is important for a healthy digestive system and to prevent constipation.

Carbohydrates, fat and protein all provide energy, but muscles rely on carbohydrates as their main source of fuel. Your muscles have limited carb stores (glycogen) and they need to be replenished regularly to keep your energy levels high. A diet low in carbs can lead to early fatigue during training and delayed recovery. If the body has insufficient carbohydrate intake or stores, it will consume protein for fuel which is problematic as the body needs protein to retain/build muscle mass. Additionally, without sufficient glucose, the central nervous system suffers, which may cause dizziness or mental and physical weakness.

As for your mental health and cognitive functioning, carbs also play a significant role. Carbs produce serotonin, which is the feel-good chemical that boosts your mood, assisting with the management of feelings of depression, anxiety and anger. Carbs also improve your memory and give your brain enough fuel to function properly.

Despite what the media tell you, there are no “good” or “bad” carbs. But there certainly ones that provide a greater benefit from a nutritional standpoint. Fruit, vegetables, pulses and starchy foods (especially wholegrain varieties) provide a wider range of micronutrients (such as vitamins and minerals) which can benefit your health. The fibre content in these foods can help to keep your digestive tract healthy and helps you to feel fuller for longer.

Sugary foods such as lollies, pastries and soft drinks are often referred to as “empty calorie” foods because they don’t offer much else besides pure energy. In addition to this, these carbs are often not very filling, which results in people consuming higher amounts of them. But that doesn’t mean you have to avoid them. For a healthy sustainable diet, we recommend getting 80-90% of your carb intake from whole, nutritious foods and the remaining 10-20% can be used for more processed carbs.

HOW MANY CARBS SHOULD WE EAT & WHEN?

The “optimal” carbohydrate intake for you depends on numerous factors, such as age, gender, metabolic health, physical activity, and personal preference. It’s impossible to give you a recommendation without taking all of these things into consideration.

Despite what you may have been told, there are no particular times of the day when you should avoid eating carbs. The energy you consume from carbs doesn’t magically get stored as fat after 6pm. There is evidence to show however that eating more carbs around the time of your workout is beneficial for energy levels and training performance but aside from that, it really is up to you when you choose to consume them!

Carbohydrates are a major source of fuel and nutrients for our bodies. You do not need to avoid them – they should be part of a healthy diet, even when the goal is to lose fat. Cutting out a single macronutrient from your diet is restrictive, unsustainable and can impact on your health and performance. If your goal is to lose fat then it is important to ensure that you are in a calorie deficit and eating a balanced diet that includes all macronutrients!

Join the Find Your Balance community.

Fill in your details below to receive a FREE copy of Our Favourite Macro-Friendly Recipes For Busy Gals eBook! 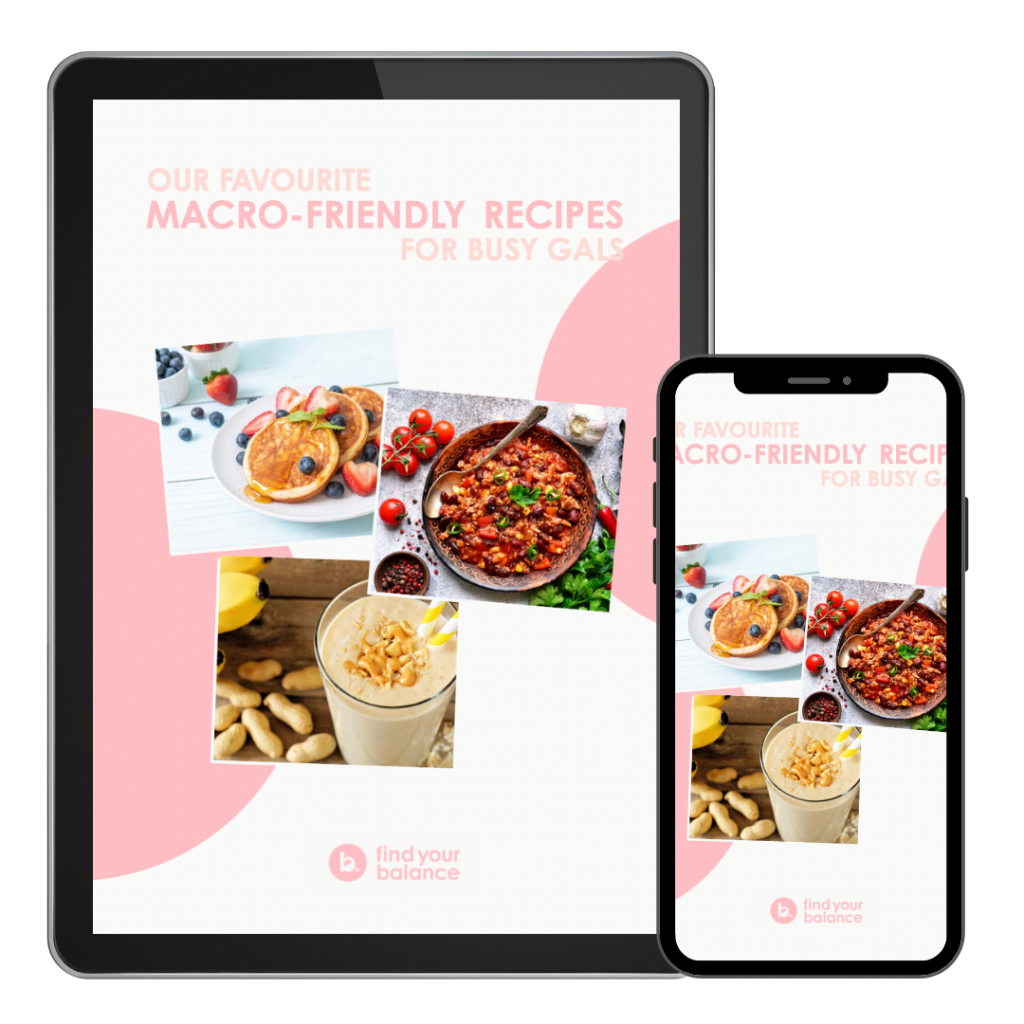 10 of our favourite macro-friendly recipes for busy gals!

These recipes are so delicious and easy to make – perfect for busy mums and those low on time!

Enter your email address to receive your free copy!